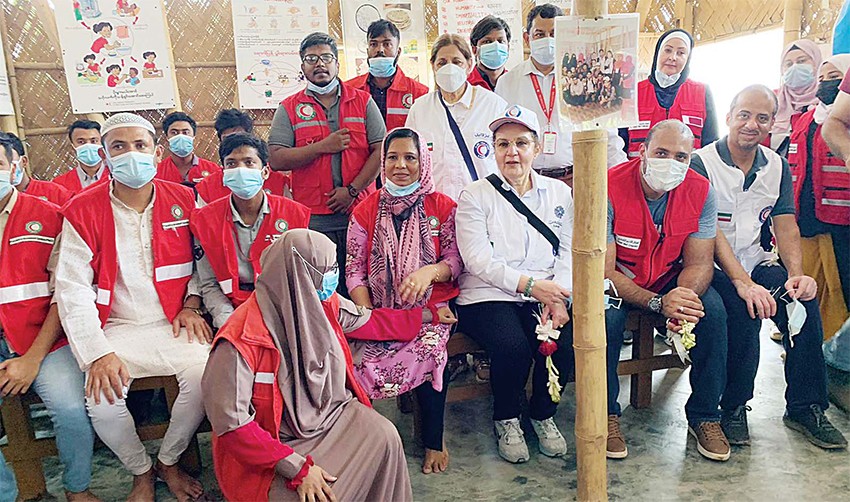 KUWAIT CITY, July 18: The Secretary General of the Kuwait Red Crescent Society (KRCS), Maha Al-Barjas, said that since the Rohingya crisis in Bangladesh, the Society along with other humanitarian organizations have been implementing implementation of multiple relief projects, indicating that 1,200 housing units have been built thanks to a donation from the Kuwait Fund for Arab Economic Development (KFAED) and the Qatar Red Crescent. Al-Barjas added in a press statement on Monday, after the association’s delegation visited four Rohingya refugee camps in Cox’s Bazar, Bangladesh, that various food items were also distributed, as well as support for projects. health care and water in this region.

Al-Barjas said that the KRCS and the Qatar Red Crescent Society (QRCS) have sought, during field visits, to build the capacity of medical and technical cadres, as well as raise the level of awareness about the Rohingya minority, adding that the delegation on the ground was briefed during its visit on three health centers that were operating in the camps to provide treatment and medicine to more than 50,000 Rohingya patients. She pointed out that these field visits aim to know the needs of the Rohingya refugees and the Bangladeshi community, and distribute in-kind materials to 1,200 families in the camps visited. She added that the contribution of the Kuwait Fund for Economic Development and its continued support for the association’s efforts were reflected in the pioneering humanitarian efforts of the State of Kuwait and its effective contribution to improving the lives of millions of people. people in need around the world. world.

Speedy recovery
“We have worked closely with countries and institutions around the world to support immediate responses to help those most in need and to ensure rapid recovery,” she said. For his part, the director of the international relief and development sector of the Qatar Red Crescent, Dr. Muhammad Ibrahim, praised the distinguished cooperation with the Kuwait Red Crescent. through coordination and cooperation to serve Rohingya refugees in Bangladesh.

Dr Ibrahim said QRCS’s management of the humanitarian crisis of the Rohingya people is proceeding through an integrated strategy which began to be implemented 5 years ago by opening a representative office for the Crescent in Cox’s Bazar, which is Responsible for project development and implementation. and activities that contribute to education, health, the environment, adequate housing, crafts and production projects, in addition to economic and social assistance that ensures a decent life for the beneficiaries .

Meanwhile, the Secretary General of the Kuwait Red Crescent Society (KRCS), Maha Al-Barjas, said on Sunday that the Society, in collaboration with the Kuwait Fund for Arab Economic Development (KFAED), is carrying out projects humanitarian aid to alleviate the suffering of Rohingya refugees in Bangladesh. During his visit to Sadar Hospital in the city of Cox’s Bazar in southeastern Bangladesh, Al-Barjas thanked the Fund for its strong contribution to humanitarian aid projects, including medical projects, aimed at to improve the living conditions of the Rohingya people. The Fund has offered funding for emergency and outdoor patient services at the hospital through a partnership with KRCS and the International Committee of the Red Cross (ICRC), she noted. The Fund has also donated $5 million to projects to meet the urgent needs of nearly one million Rohingya refugees in Bangladesh, including logistics, health care and medical services, Al-Aladdin added. Barjas. (KUNA)