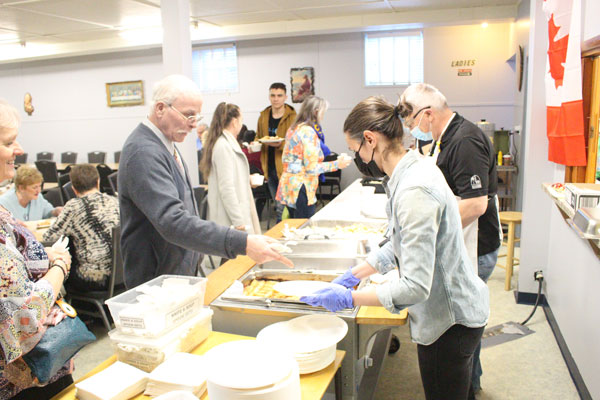 Fundraiser for Ukraine raises over $15,000 for charities

A benefit dinner for the people of Ukraine on Saturday at St. George’s Ukrainian Catholic Church exceeded all organizers’ expectations.

The event, which included a Ukrainian party, had funds going to Come Back Alive, a charity that supports members of the Ukrainian forces with non-lethal gear.

The event also featured a silent auction by the Veselka Ukrainian Cultural and Heritage Club with funds going to the Canada Ukraine Foundation, which is involved in several humanitarian projects in Ukraine.

According to Kachkowski, the final numbers haven’t been fully confirmed, but the dinner itself brought in $12,000 and the silent auction brought in around $3,500.

“We are talking about over $15,000 raised in total for both organizations. It’s great,” he said.

The event exceeded expectations in every aspect according to Kachkowski.

“We initially printed 200 tickets because the venue could only accommodate 140, then we wanted to offer a ‘take away’ option and the ‘take away’ option proved more popular than I had originally planned,” he explained. “However, we still had a good group of people enjoying dinner in the hall and then of course the silent auction. In total, I believe 320 people came.

He said the event had a few hiccups, but once things fell into place, everything went smoothly.

“It was put together pretty quickly and because of that there were a few logistical issues, but once we kind of figured it out on the fly we got a good flow. The traffic went quite successfully and smoothly and that absolutely contributed to the success of the event,” he said.

Kachkowski said everyone involved was happy with how it went.

“We got lots of compliments on the food,” he said.

“Those who won their silent auctions seemed to be very happy about it.”

Kachkowski attended a Veselka meeting on Sunday and said it was possible to organize similar events in the future for local, national and international causes.

Kashskowski thanked the people working in the kitchen who also came up with the idea and worked hard to cook and serve.

“Many thanks to St. George’s Ukrainian Catholic Church for donating the use of the hall, to Action Printing for donating the ticket and poster printing services, and of course to all the volunteers who did everything right when it needed to be done,” he said. “Just a huge thank you to the Prince Albert community for coming forward and supporting us.”